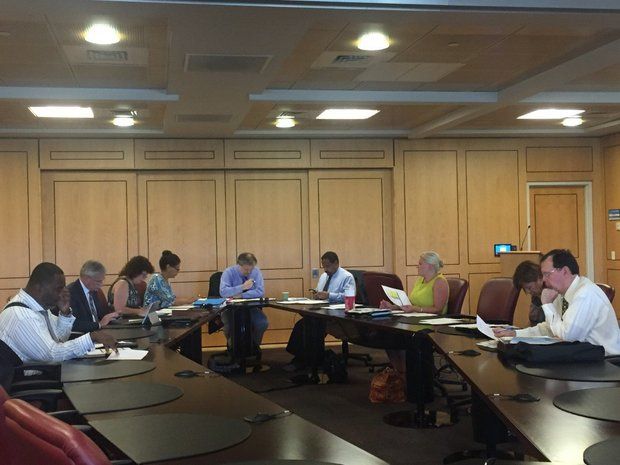 HARRISBURG- A nonprofit created by Harrisburg’s recovery plan awarded infrastructure grants to the city and Capital Region Water to repair roads, but rejected the city’s application to repay a $3.2 million bank loan to install new streetlights.

Board members of the nonprofit, known as Impact Harrisburg, met Tuesday morning and noted each entity would get about $2.7 million to pursue a joint multimodal project. The project would involve the city repaving heavily traveled streets and Capital Region Water rehabilitating underground infrastructure and installing “green” stormwater infrastructure above ground along roughly the same routes.

The award will allow the city to tap into a $10 million promise from PennDOT to improve city streets, by providing the required 30 percent match.

Capital Region Water had submitted applications for several projects, but in the end, added an application that piggybacked on the city’s multimodal application.

The decision by the CRW board, according to minutes of its May 25 meeting, reflected the board’s “dedication to ratepayers” and “responsibility of pursuing all available funds for grant funding and not a desire to be directly competitive with or in opposition to the city.”

Mayor Eric Papenfuse had previously said the LED streetlight project was the city’s higher priority. The city took out a $3.2 million bank loan to pay for the streetlights, but wanted the grant money to pay off the loan, so the city could use energy savings to fix potholes. Now the city must repay the loan in its entirety.

City officials had hoped to receive grants for both streetlights and paving, saying that was among the promises from the city’s financial recovery plan.

The board’s selection of the paving project will free up money owed to Dauphin County and AGM, as the city’s largest creditors. The city’s final settlement with creditors in late 2013 included a provision that would release money to those entities only if the $10 million from PennDOT was released.

The specific improvement projects include:

Board Member Karl Singleton, who is also a senior advisor to the mayor, asked whether the particular streets slated for improvement were set in stone, or whether the board could consider changing the streets. He said the selection of streets appear to benefit state projects more than city residents and neighborhoods.

Board Member Brittany Brock noted the dangerous intersection at 19th and Berryhill and Derry streets near two public schools was on the list. She also said city residents would appreciate improvements along the main thoroughfares, even though commuters use the streets as well.

At a previous Impact Harrisburg board meeting, City Engineer Wayne Martin said the city would like to improve pedestrian safety along several heavily traveled routes, and change a section of North Second Street from a one-way street, back to a two-way. Martin noted that one-third of city residents don’t own vehicles and rely on walking and bicycling to get around.

The grant awards from Impact Harrisburg would be paid as reimbursements, or directly to contractors, Brock said.

Impact Harrisburg’s expenditure of the $5.4 million will deplete the amount of money set aside for infrastructure grants, leaving $5.4 million for economic development grants and $100,000 for emergency contingency grants.

The board is still weighing 21 applications for economic development grants and two for emergency contingencies.

The nonprofit originally was given about $13 million in public money to address long-ignored infrastructure needs and jumpstart economic development that could increase the city’s tax base.

The mayor has previously criticized the nonprofit’s structure as unnecessarily complicated and said the money should have already been distributed. But state receivers who crafted the plan said the process and structure was necessary to avoid having the money simply go to pay the city’s operating expenses.

Board members on Tuesday agreed to set aside $1.2 million for administrative costs over five years. If the money is not used for that purpose, it could be used for additional grants, they said.

The board currently has a $156,000 annual operating budget, according to a finance committee report by Brock. Most of that goes toward the $100,000 salary for Executive Director Sheila Dow Ford, who works as a contract employee and the lone paid employee.

Board members on Tuesday also approved the expenditure of $13,300 to pay the law firm of McNees, Wallace and Nurick to write a brief asking the court to determine the nonprofit’s legal status under the state’s Sunshine Law.

PennLive in January asked for the board’s twice-monthly meetings to be public, but Board Chairman Neil Grover said he did not believe the group met the state’s definition for public agencies. The board then filed a motion in February, seeking the court’s guidance.

Commonwealth Court Judge Bonnie Leadbetter has not yet issued an opinion. But at a financial recovery status meeting Monday, she said she thought the matter had been resolved. She encouraged both parties to seek an agreeable solution outside of court, if at all possible.

In the meantime, board members have allowed reporters or members of the public to attend the meetings, although the times and locations are not publicized.

The $13 million for Impact Harrisburg was set aside from the sale of the city’s incinerator and long-term lease of the city’s parking assets in late 2013.